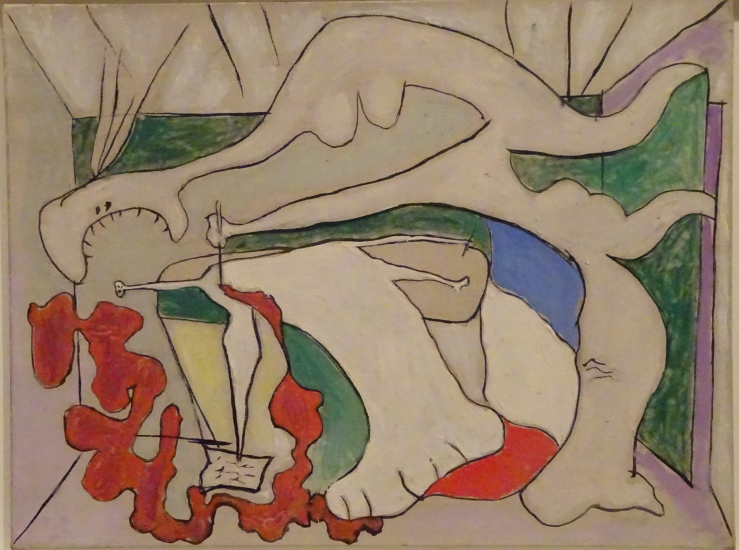 I can’t be the first to think that Picasso is too profuse, that he painted too much. One way of coping with an overpowering surfeit of work is to limit your focus in an almost arbitrary way, and to concentrate on everything produced in a certain year, for instance.  Picasso is one of the few if not the only artist with whom such a bizarre tactic makes sense. We are helped a lot by the fact that in the early 30s he is dating his paintings by the day. So the works in the Tate exhibition were usually labeled with a day’s date, and only after that, a title.

Luckily the curators were not strict about the boundaries: a few works from 1931 crept in, and a couple from 1933-34. There’s no great consistency or sublimity about 1932. It was the year of his first big exhibition: that might have stirred him to produce more, but there’s still a pleasing arbitrariness in the choice.

Picasso is notoriously restless, but repeats subjects he likes, repetitions that are always variations not copies. Some of the most enjoyable moments came in following transmogrifications of simple themes, like the 26 small pages of Sketchbook no. 17 in ultra thin pen-lines that summoned up beings like one-celled creatures seen under the microscope, who seemed to be floating or swimming when viewed sideways. In fact you could only have this experience in the catalogue, with a magnifying glass, but it was magical, and gave a more intimate sense of Picasso’s inventiveness than almost anything else in the exhibition. 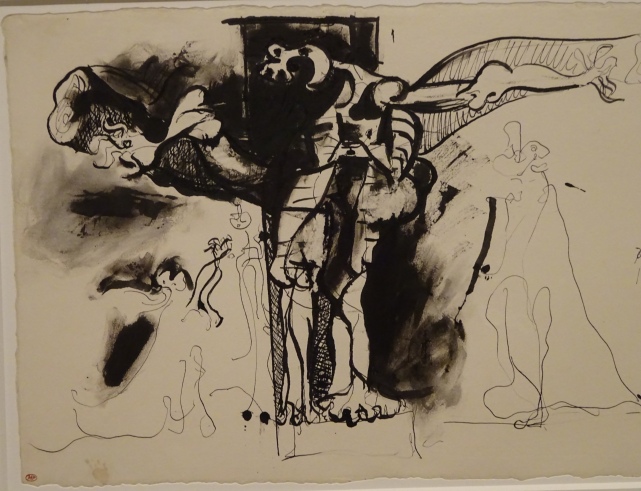 Strangely enough, the supreme display of invention in the show began with a kind of copy, a copy of Grunewald’s famous Crucifixion in Colmar. Apparently it is doubtful that Picasso ever saw the work itself. In any case, he must have depended more immediately on a photograph, probably in black and white. Almost at once the painting got away and became something else, a meditation on cruelty or alienation and the dispersion of the self. Images of these dark drawings below follow the sequence Picasso followed, moving further, then nearer, then further again from recognisability, an oscillating approach to something that keeps threatening to disappear. 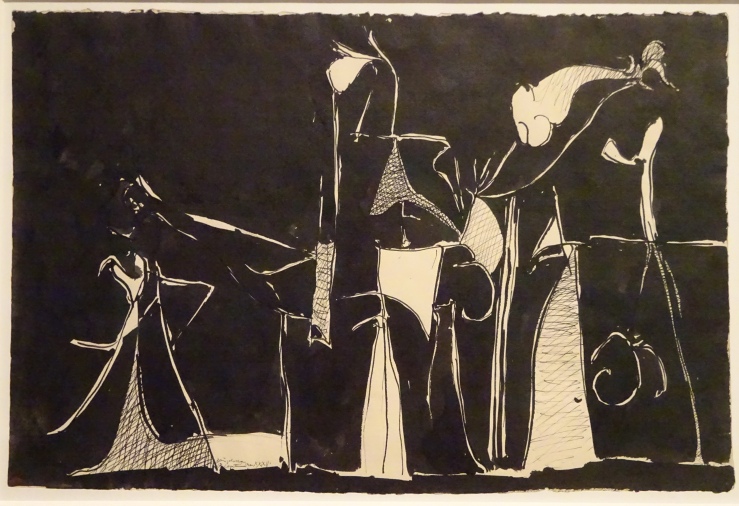 At almost the same moment he was doing a series of little sketches of women playing ball on the beach, sometimes crowding and even stepping on each other. Some observers have detected conflict or ambivalence in Picasso’s ability to entertain these two subjects almost simultaneously, violent cruelty and Dionysiac release, and they have also read both extremes into one another. 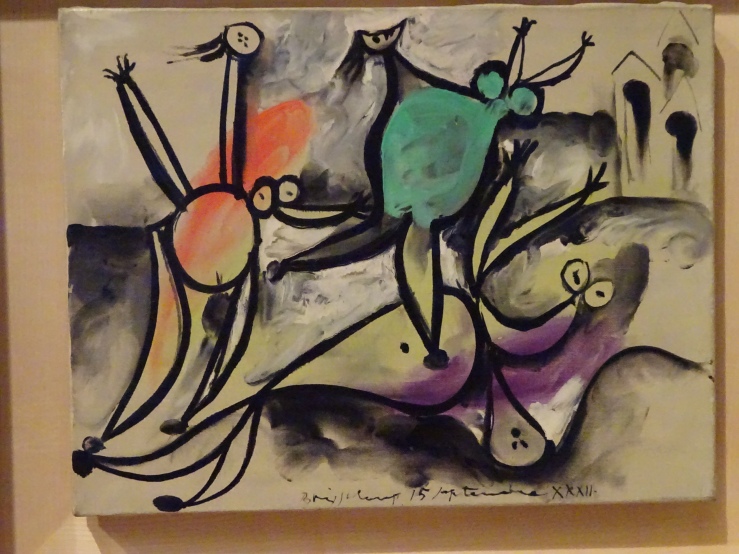 It remains a question to what extent simple themes like women playing or sleeping are carrying heavy metaphysical burdens in the work of 1932. Two famous nudes, Nude, green leaves and bust and Nude in a black armchair, provoked enthusiastic response in the art-dealer Kahnweiler, who thought them the best things Picasso had done, ‘as if painted by a satyr just after he had murdered a woman’, his way of expressing their frightening intensity. 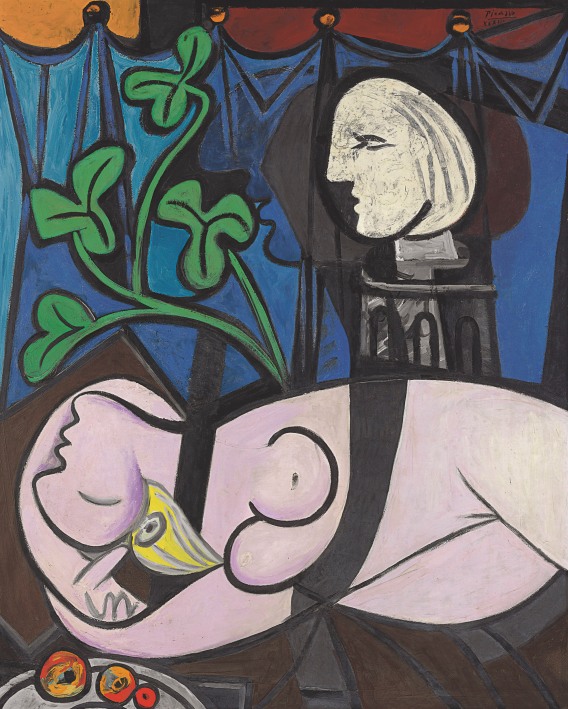 T J Clark connects the two paintings to Rimbaud’s ‘Je est un autre’ and Picasso’s ‘I am a woman’, by which he evidently meant more than just ‘the artist enters his subject’. Clark finds them a searching examination of desire and of the experience of sexual differentiation. The ideas are fascinating but the paintings do not support them. I am reminded of Leo Steinberg grappling with Michelangelo’s Last Judgment, imparting a powerful sense of struggle as he erects an intellectual structure that doesn’t match my experience of the painting. I have enjoyed the chase much more than most disquisitions I agree with, but I back off from the conclusions. Likewise with Clark—all this firepower is trained on bland and nerveless work. Picasso is not a colourist, a failing he can often conceal. In many of the larger pictures of this period, including these nudes, either horrid pastel shades predominate, or dull thickness of paint.

So I found more enjoyment in the sculpture, which was perhaps a fresher medium to him at that moment, which in plaster or clay versions has a visceral immediacy that the larger paintings mostly lack. An interesting sub-genre crops up repeatedly, paintings that depict sculpture-like forms, another instance of Picasso’s grabbing onto sources in the world of art. In one of the most interesting of these, the paint itself was more lively, as if the idea of fresh clay had stirred him to a vivid rendering of its wetness and the variety of sheens on the surface, aspects of reality that he usually ignores. 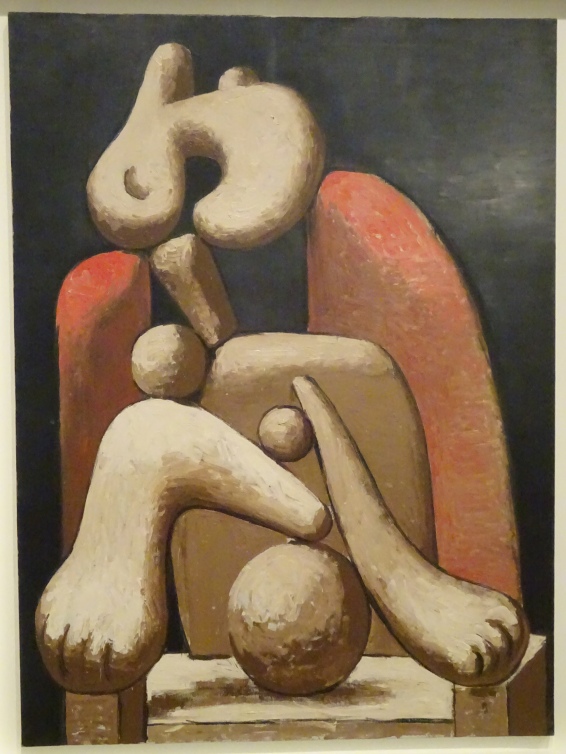 Sculpture also seems to be a realm where wit is licensed. The Woman in the Garden of 1925 is full of hilarious analogues in the world of construction to organic shapes and details. Here Picasso can play, an impulse which appears in his painting both before and after 1932, but in the exhibition it is usually sculpture or small and sketchy works which provoke a smile or introduce narrative complexity. At the end of the year a theme emerges, Rescue, which has its mythic reverberations, and which at least once reverses direction and becomes Rape. Here that alarmingly divided character surfaces again, who is unsure whether he is saviour or destroyer. 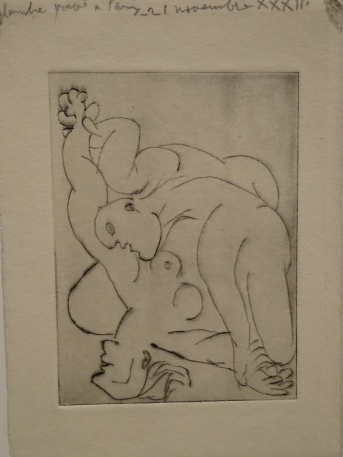 Kahnweiler doesn’t identify precisely the paintings that have impressed him.  Clark thinks it likely that the two mentioned above are the ones that provoked the ‘satyr’ comment (repeated in a letter to Michel Leiris dating from the time in March 1932 when the two nudes were painted).