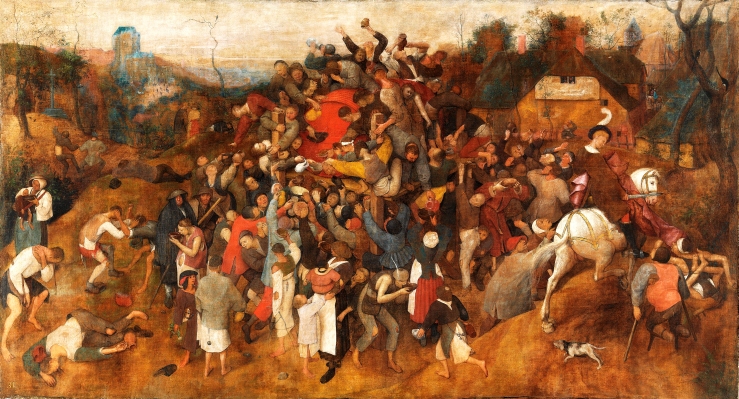 A few years ago I stumbled across a reference to a new Bruegel which had been found in an obscure Spanish collection and, soon after its discovery, ended up in the Prado.

The first question was: could it be real? Could a very large painting by this painter go unnoticed for all those years?  Its subject was unheard-of and the composition inconceivably grotesque—it showed a tangled mountain of people glued together in an acrobatic mass. There were lots of them, of all different ages, trying to get their hands on wine squirting from a huge red barrel in a tiny stream, all the figures pushing forward a wide variety of containers, pitchers, bowls, hats, broken and intact, some just potsherds, the vessels a digest of the extreme human variety that jostled for space.

I was convinced almost at once of its authenticity and its large contribution to our knowledge of the artist. The painting is full of memorable poses, which fix themselves in the mind as weird but true snapshots of human types caught in extremis, stretched to the limit in pursuit of a clear goal near at hand. Typically, some of the best are seen from behind, a condition often treasured by Bruegel because it guarantees unselfconsciousness and thus a kind of authenticity. Maybe that is the main secret of the strange subject, that it combines people revealing themselves exuberantly while packed into unheard-of nearness, more like a nest of writhing snakes than any previously-known depiction of a human gathering. 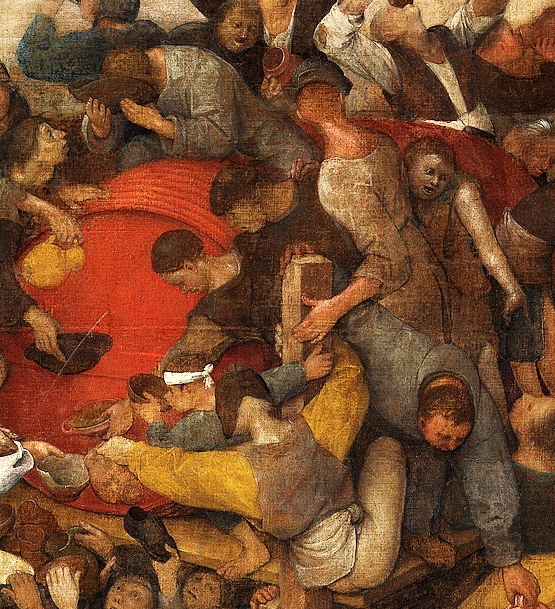 Bruegel has set himself an impossible, and, we might have thought before seeing how he would set about it, absurd, challenge—to build a multi-storey building consisting of human forms with no superstructure for them to cling to except the cradle on which the barrel is raised.

Bruegel uses a shifting perspective as he did in the Vienna Tower of Babel in order to show densely crowded figures viewed from above extending laterally and viewed head-on extending vertically. As in the Suicide of Saul it seems the most natural thing in the world for whole ranks of figures to be making the same gesture in series, reaching frantically upward to hold out their bowls toward the source of oblivion.

This is furthest from a still or quiet crowd–most of them are frantic–but there is also a complete spectrum of those turning away from the scramble because they are busy drinking, have already passed out or have noticed another goal, the knightly figure in the lower right corner, who is distributing something more valuable than cups of wine. St Martin on horseback has attracted a small crowd of cripples and the destitute anxious to get a piece of the voluminous cape he is slicing up with his sword.

In the distance are magical glimpses, caught as if through keyholes, of a rider at a gate and a scattering of tiny figures in the open space at the foot of the castle on the horizon. The most convincing and precious features of these sketched-in elements are the delicacy of the drawing and the transparent thinness of the paint.

One of the best discoveries of the magical enlargements on the Inside Bruegel website is seeing how often Bruegel puts the paint on so thinly it is like drawing itself and lets his underdrawing show through, invariably carried out with great confidence, without slips or mistakes. 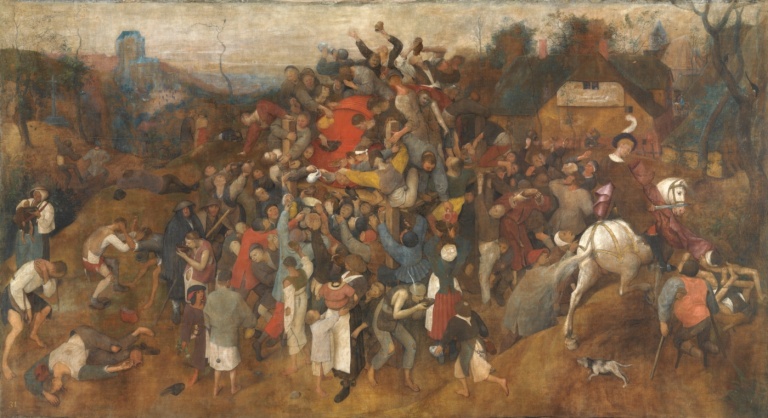 The Wine of St Martin’s Day is painted on linen with something like tempera instead of oil, a technique known from both the beginning and the end of his career in the Brussels Adoration and the Naples Blind Leading the Blind. It looks (and is) fragile and evanescent, the colour more transparent and fleeting than usual. Why he used this frail medium in his largest painting by far – 2½ times the size of the otherwise largest Procession to Calvary — seems impossible to know.

The subject is the least substantial:  an experience of passing intoxication, another instance of religion subverted by folk indulgence, human beings behaving with the carelessness of may-flies, aptly captured in the dodgiest, most ravishing form, a work that is at once the painter’s most daring and most throwaway. 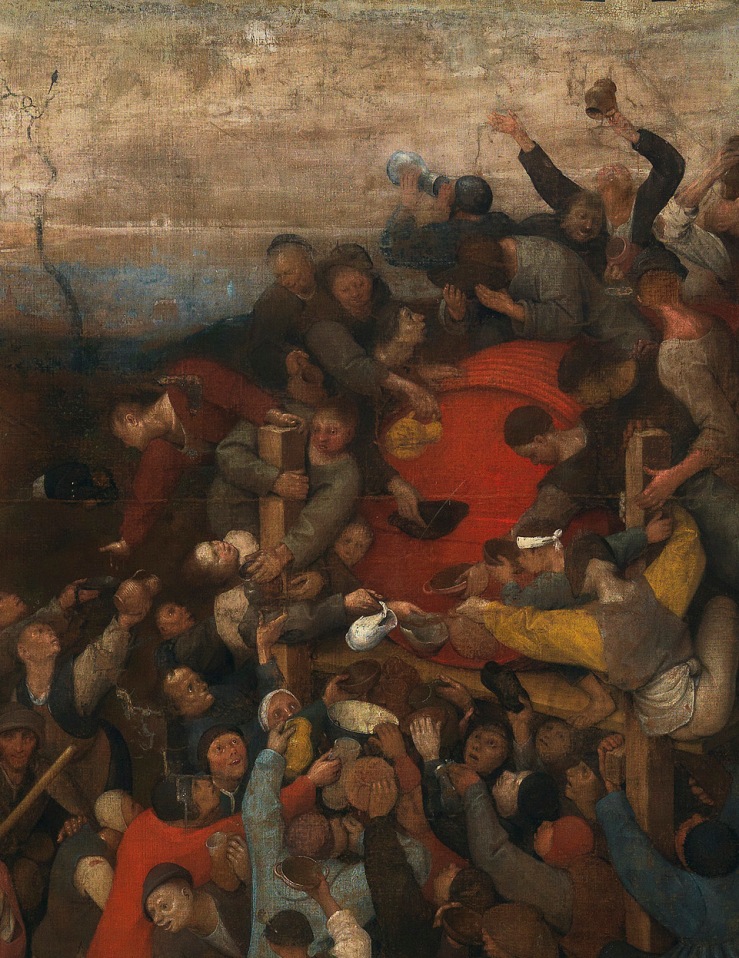