What a surprise to find these hiding on the back wall of the restaurant in the Sainsbury wing, a space that seems too low for them. Or does the feeling of spatial uncertainty spring from the intricate jokes buried in Rego’s teeming images, expressed in the alarming range of sizes she likes to play with, never more than here? There are two main populations, oversized figures from the artist’s childhood or 19th century Portugal—I can’t tell which—and another set who’ve shrunk to smaller than dwarves’ tininess under the influence of minute stories on blue Portuguese tiles which keep turning up, leftovers from an earlier stage when Rego thought she would paint the whole scene to look as if they were blue and white tiles.

In the end the colour scheme is stranger and more complicated than that, something close to grisaille, mainly grey, bronze and white, bronze the odd one out, like a dark flesh tone applied to figures mimicking larger than life-size sculptures in metal. These choices are partly a kind of tactfulness, not intruding too aggressively on what goes on in the room—servers and diners occupy an intermediate position between the big and small people of the mural—and a way of making clear that they’re depictions that don’t want to compete with reality.

Toward the final section on the far right, tile-coloured but not tile-seeming, comes a crowded set of reminiscences of various paintings in the gallery, centuries and national schools thrown together, medieval subjects not painted medievally but in Rego-language, not banging into each other, but neatly stacked like memories in an attic or storeroom of art-historical motifs. Who is the bricoleur who could make connected sense of all this flotsam? Is that precisely Rego’s gift?

The range of colours gets richer the longer you study it, as in the grisailles of Rembrandt or Bruegel. And the animals that always carry some of the moral in Rego are not missing. They are given a large part but not a full-size one; we find them everywhere, lurking in corners and hanging around at the edges. A largish toad is my favourite, and momentarily I have lost him. Many cranes slide elusively round columns, and the smallest spaces of all are packed with Aesop or similar stories, a wealth of which you will not reach the bottom. 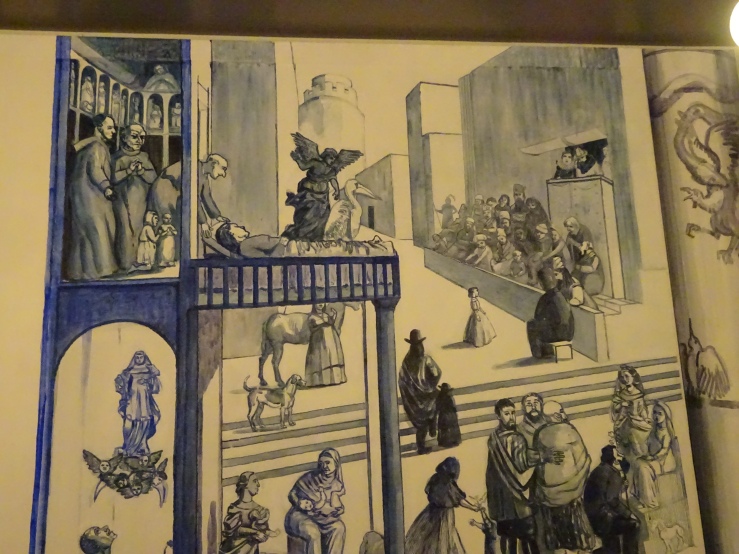 Paula Rego was the first Associate Artist at the National Gallery in London, 1989-90.  The mural, completed in 1990, is called Crivelli’s Garden, said to be inspired by one painting in particular, The Madonna of the Swallow (it’s quite a puzzle to find the resemblances) and populated, according to the artist, by people who worked at the gallery and are shown playing the parts of saints.