Aftermath at Tate Britain, & Teeth at the Wellcome Collection, two exhibitions on disparate themes–artistic responses to the First World War and ways of coping with a troublesome part of the body. 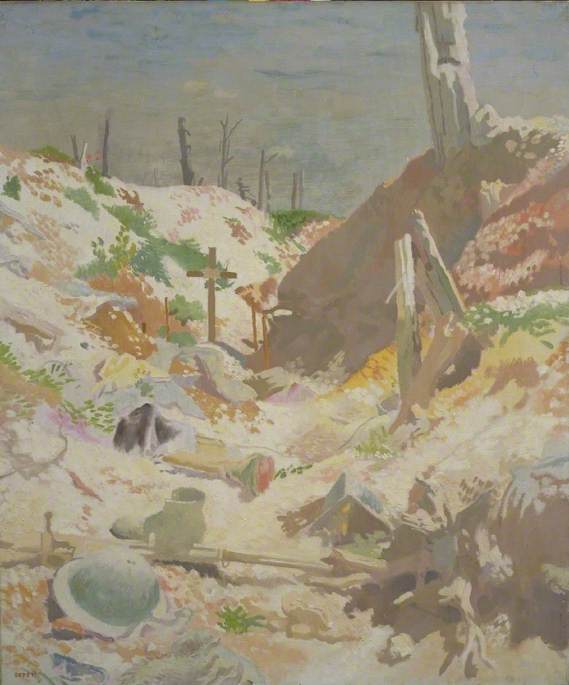 Much of the time Aftermath looks like another art exhibition. It leads off with paintings like Orpen’s Grave in a Trench, a bleached-out scene long after the battle, and Roberts’ Shell Dump, France, crowded with zombie figures underground.

But then curiosities creep in, like paper knives with shrapnel handles or ‘nail art’– patriotic icons made mainly of nails, each banged in by a different member of the public, who thus gets the illusion of contributing to the war effort. Then there are documentary photos of damage to Reims cathedral and a fascinating film of a trip over the ruins of Ypres in a balloon. I didn’t question the pictures of Reims, especially the ruined stone angel bandaged with ropes and pads which both personalises and distances destruction.

I began to wonder though when presented with old photos of second-rate decorations in the centre of Paris or plans for humdrum war memorials, especially when Lutyens’ astonishing arch at Thiepval is left out. Charles Sargeant Jagger’s No Man’s Land follows the format of a memorial, a long horizontal slab, but disrupts the convention with a scene that is above all jagged, jammed with severe and heartrending detail scratched into bronze gone grey from grief. It shows six corpses strung up on barbed wire or stretched out in mud, and a lone sentry who is taking cover among the relics of death.

Among the most uncomfortable but thrilling exhibits are Henry Tonks’ pastels of soldiers’ badly damaged faces. Jagger gets too close to what death looks like for comfort, and Tonks gets even closer, with living subjects, who are walking, breathing memorials or ruins of war. These works are redeemed by Tonks’ skill, by an unexpected artistic flair, and by sympathy which penetrates the men’s carefully controlled anguish. 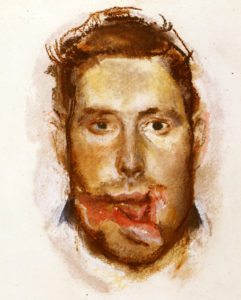 My heart sank when I came to a room called The Print Portfolio, a category which appears out of nowhere, as if we’ve run out of thematic subjects and turned to technical forms narrowly considered. It happened that two of the series were among the highlights of the exhibition, not because they fit the inappropriate category but because they were powerful. Otto Dix’s War prints gave the most nightmarish visions of all, far more interesting than his paintings, and Max Beckmann’s Hell created a kind of spatial anguish in everyday situations where all is splintered fragments.

Now comes a room that you should skip, the largest in the exhibition, full of big paintings. It is called Return to Order and constitutes a denial of the excitement generated by the preceding denser displays. It feels un-assimilated, included just because this too happened in this period, 1916-32, boundaries which look arbitrary when used to excuse the presence of forgettable work on a bigger scale than the little prints and drawings.

The limitation to France, Britain and Germany is here exposed as both too wide and too narrow. It has pushed curators to include such dire painters as Marcel Gromaire and dim Germans only present because they illustrate particular social-historical themes.   What a relief to get back to the authentic seriousness of Dada, in Grosz and Heartfield’s The Bourgeois Philistine Heartfield Goes Wild, a work of 1920 (reconstructed 1980) held over until the last room of the exhibition. It shows the human figure turned into a tailor’s dummy by modernity, with a light bulb for a head, as if it were the war-wounded in a perversely perfected form, pure prosthesis.

Comparing Aftermath to Teeth at the Wellcome is unfair in one important way. Most of the exhibits in Teeth were never meant to be displayed to a curious public. They include models of teeth and mouths for dental students to practice on, and actual skulls containing outstanding decay or dental work in rare materials, of which photographs are politely discouraged. They also include lots of obsolete devices, some of which are mainly quaint, like drills operated by a foot pedal, while others now seem instruments of torture, like heavy metal ‘keys’ for yanking out teeth with a sudden twist.

The energy and fun of Teeth comes largely from abstracting these objects from their normal locations, a transposition which changes them utterly. There’s often a dose of  the surreal, even Dada, when they move from the world of work to the realm of play, where most of the Tate’s exhibits started out. 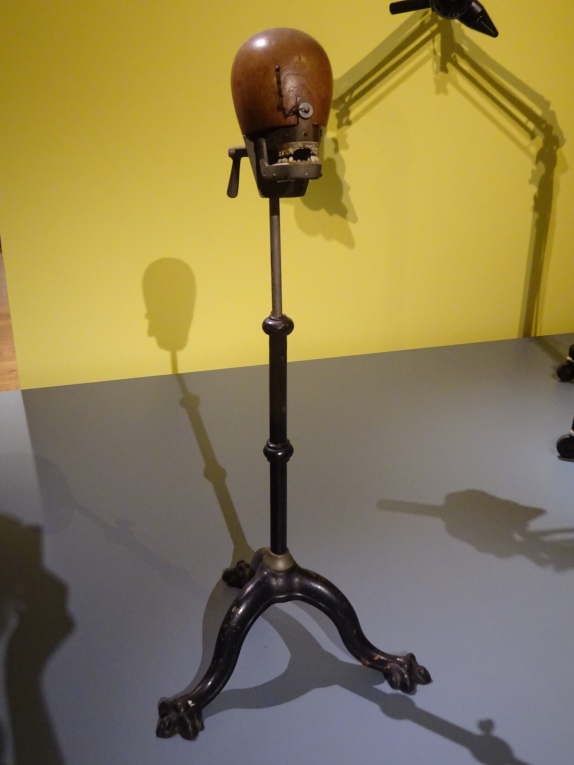 The closest crossover came when we met another mechanical man with a smooth wooden skull implanted with obscure metal devices and genuinely carious teeth who, like the Heartfield mannequin, sat on a spindle or post, which brought him up to normal human height and tempted you to endow him with human traits.

Enormous model teeth with cave-like hollows for demonstrating different kinds of filling are here just creatures from nightmares, material for stories. Sometimes you wonder if the Gothic element in a howling face wasn’t relished by the original fabricator. Maybe there has always been an almost clinical enthusiasm for certain kinds of horrendous but unthreatening pain. This head, which calls up the mad researches of the 18c Austrian sculptor Franz Xaver Messerschmidt, seems prepared to drown analysis in feeling. 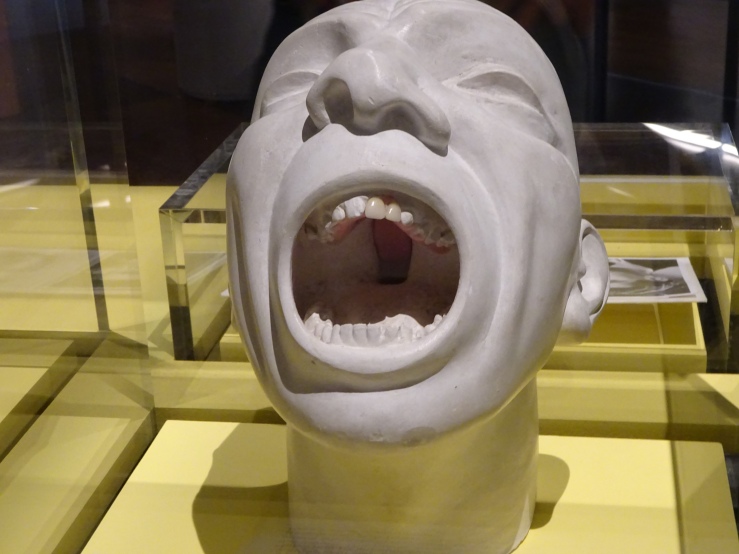 Deciphering the spirit in which the Wellcome’s objects were collected would be an absorbing study. A fantastic intent surfaces more than occasionally. Among my favourites were a poster showing the furthest nightmare of a user of the old kind of toothpaste tube that split or fractured easily, resulting in mock carnage that takes unspeakable humanoid form. 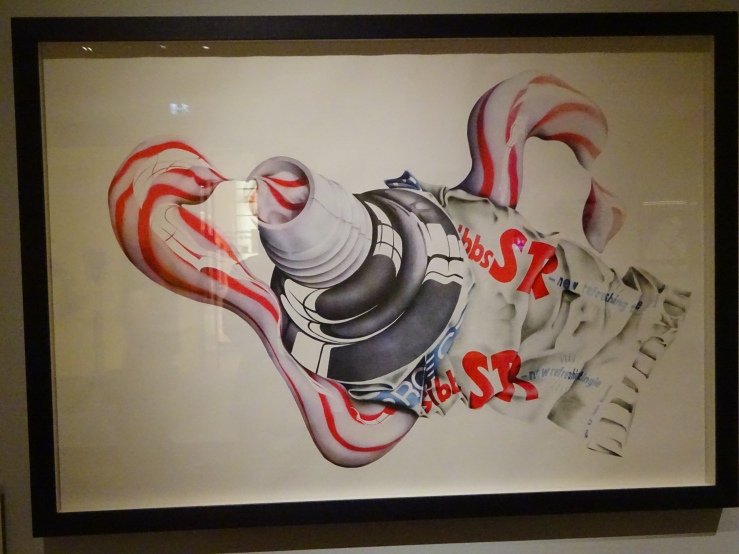 Next to it came the unsettling magnification of a decayed tooth into a wonder of the ancient world. A dentist once explained to me why what goes on in the mouth feels so much bigger than it is, but it seems self centred to dwell as we do on the affairs of these little hidden universes, which, like the Colosseum, occur in storeys and arched shapes.

Like the Tate, the Wellcome tempts you to keep going when the exhibition is over, straying into other rooms wondering what you will find there, perhaps another instrument of torture, like the early X-ray machine that resembles a treadmill turned on its side

or another Surrealist juxtaposition in a ball-gown decorated with a huge collection of contraceptive pills in their plastic bubbles, enough for 26 years of daily doses, someone’s calculation of how many fertility-suppressing tablets a woman would need to take in a lifetime, reduced or elevated here into a bewitching glitter.