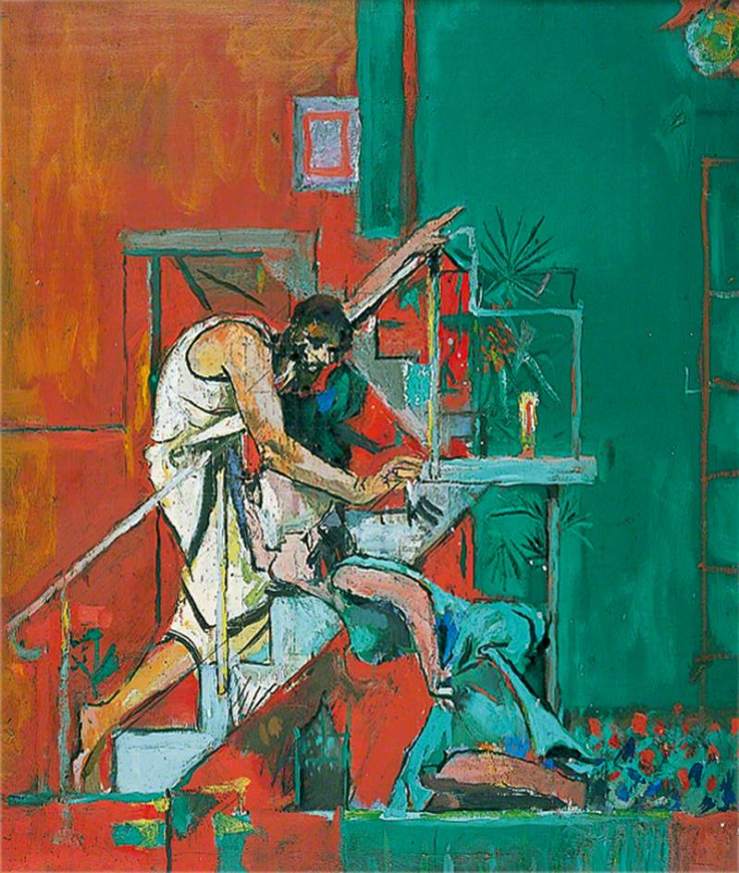 The distinguishing feature of Chichester cathedral is a collection of modern art, meaning mostly pieces from the period 1957-77 when Walter Hussey was Dean and patronised living artists. These are scattered around the building like the hidden prizes in a children’s game. They make an unorthodox focus for a visit and aren’t picked out on the free guide distributed at the entrance, or known to the friendly volunteers who each recommend their own favourite features to visitors.

Ian Nairn wrote the West Sussex half of the Pevsner for Sussex where he claims that Chichester is the outstanding example of a typically English cathedral. Of course Nairn is famous for finding irreplaceable uniqueness in ordinary buildings, a fruitful kind of delusion that his readers willingly fall in with. Chichester is quintessentially nondescript, but it is his. He describes its steeple looming over the surrounding landscape with the devotion of a native.

But he is wrong: the beauty of this cathedral as a background for twentieth century art is its self-effacing ordinariness. In the neutral setting the works count as they never could in Lincoln or York. Hussey’s favourite artists are still figurative — modernists who straddle an important divide, but remain thrillingly heretical in a Gothic building.

Hans Feibusch is a fascinating figure, a Jewish refugee from Nazism who made his name with large murals on religious subjects in Christian churches bombed in the war, where his weird colours make the familiar subjects into conflagrations. Feibusch’s Baptism of Christ by the font in Chichester is painted on canvas instead of the wall and isn’t big enough to take charge of the space.

I have to do some detective work to see a Graham Sutherland at the end of the aisle ahead of me, too small to catch my eye the first time round. I find a postcard of it in another building, the shop, and retrace my steps, crossing a quad to find it. Because I now know what it looks like, I can see it staring me in the face. It’s a Noli me tangere which Sutherland has twisted into his characteristic brand of grotesque by putting Christ halfway up a stair clinging to a building and Mary Magdalene contorted on the ground but craning upward. Like Feibusch Sutherland brings colour harmonies wonderful in themselves, but improbable in the context, to dislodge expectation. 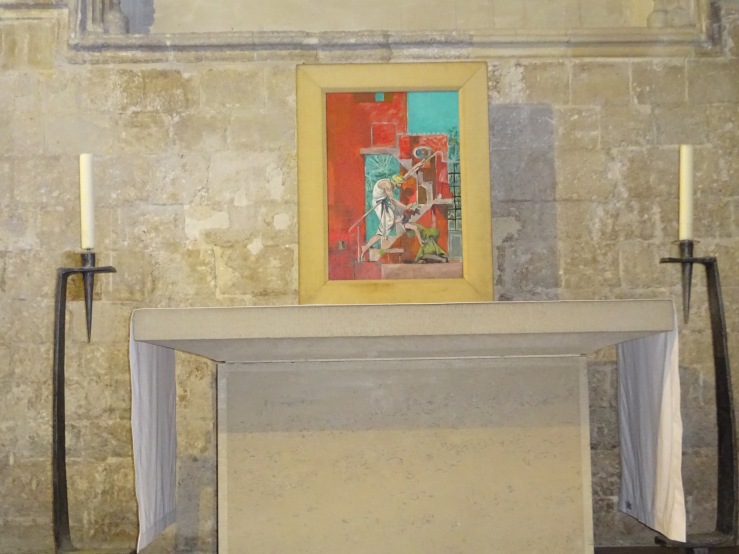 The retrochoir at Chichester is the one real architectural inspiration here, a perfect space lurking between the choir and the Lady Chapel and functionless for centuries, until the cult of the local saint was reinstituted with the help of some modern art in the twentieth century. This includes a large German tapestry on the theme of St Richard. There’s a very good label explaining it as full of symbols, all made unrecognisable by representing them as fragments of rock crystal, art hiding its spiritual teaching in ambiguous forms. I thought it mainly a crowd of angels with plant shapes at the sides and exploding flowers, all forms that had to force themselves into being. I didn’t detect the sea or the lotus or the fire until they were pointed out, or the serpent climbing the cross. It took a long time to produce and it mesmerised me. 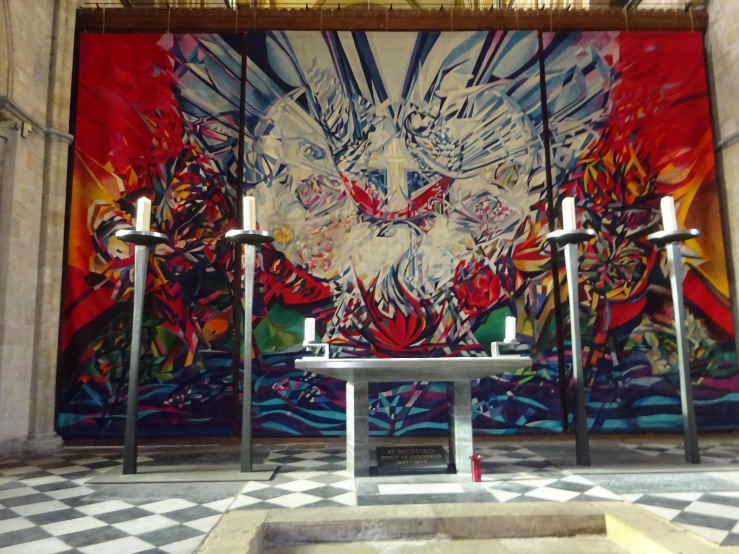 In a corner of the space was a little model of a piece of very Baroque sculpture whose swirls of drapery were hard to pick out against the dark background. Improbably high overhead stood the sculpture itself. Can the sculptor have had any idea where his finely wrought work was going to end up? Without the model to point you toward it, would anyone ever notice it?

As time went on your eyes got better at picking out the newer art concealed among the architectural shrubbery. The main goal of the day was an exhibition in a museum, and it just happened that the cathedral lay across the path to the real goal and the true museum. In retrospect the cathedral’s kind of display came to represent nature, or offered something like finding rare minerals washed up on a beach, objects camouflaged just enough by the way they partook of their setting to let you think that you were their discoverer.

The cathedral, framed on one side by its own wilderness, was joined abruptly to the town on the other side, whose West Street ran right along the whole north flank of the building. It was a miniature model of a city left intact by time, which seemed very normal and which only experience taught you to recognise as miraculous.

The museum lay in the heart of a quadrant of the regular town that replicated the form of the whole, scaled down a stage or two. Like the cathedral the gallery was a strange hybrid, the grandest eighteenth-century house in Chichester (i.e., not that grand) yoked to a modern extension by a Scandinavianly-inclined architect (not that modern). It was a discord that grew on you until it seemed a harmony.

It could almost function as a definition of childishness to be unable to wait a decent interval for something you want, or until, say, its time came round naturally in the calendar. I knew that the Bomberg exhibition I had come here to see was going to arrive in London before very long anyway, but after chafing for weeks, I finally decided I couldn’t wait. The only rational excuse, a flimsy one, was a little display of Paula Rego’s drawings which ran alongside Bomberg, certainly not enough by itself to justify the commotion of this trip.

Maybe the imaginary nature of the journey made it almost metaphysically necessary. I started with the Bomberg, which didn’t disappoint, enhanced by the unlikelihood of finding this very urban, Jewish artist in Chichester. The exhibition made sense of some of his least accessible works, like Jujitsu, which was shown as if occurring in stages, first in a geometrical tangle which remained a three-dimensional space, like some labyrinth of Hebrew thought, before it turned right before your eyes into the flat pattern of the later painting, which preserved a clue to its source in the absurd name Jujitsu, pointing you to the gym in Whitechapel where Bomberg had made the first sketches.

I broke the exhibition in the middle, for even a small display can seem big, or too big for devouring all in one go, if you are looking too hard. With hindsight, I see I was lucky to break it where I did (though in a sense I had no choice) because late Bomberg is another universe and ideally requires a starting over.

My holiday from Bomberg was not rushing outside for real air, but more paintings, the permanent collection at Pallant House, all British or even English, all from the twentieth century, beginning with Sickert and carrying on to painters like Kitaj, Michael Andrews and Peter di Francia, anathema to me until almost this very year now. Imagine liking the 1940s 50s and 60s best of all! What has come over me? Something about the local and the inconspicuous, about things that all belong together and would almost prefer to be overlooked so that they could get on with the business of looking. At Pallant House they are often small scale, the Sutherlands for instance, a gnarled crucifixion, or even more wonderful, a Thorn Head like Blake’s magnified cross section of the head of a flea with the biting machinery exposed, like a Christ who has internalised the crown of thorns, inviting his suffering inside, appropriate in Chichester and in Walter Hussey’s own collection. 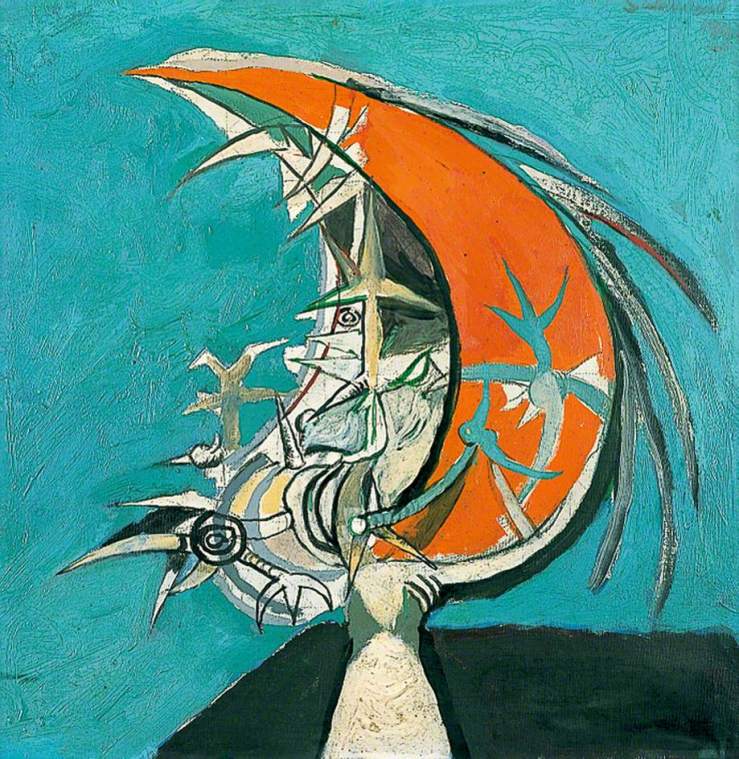 The Chichester gallery calls itself a collection of collections. So far for me two of the collectors stand out, Hussey and Colin St John Wilson, architect of the British Library, one of my favourite 20c public buildings. Sandy Wilson (as we learned to call him when he was external examiner at the architectural school where I taught) also designed the bold (for Chichester) extension to Pallant House (no longer big enough, I heard just the other day). I try to imagine how Hussey and Wilson might have got along. Their collections accord wonderfully well, like the two buildings that don’t look as if they are going to at first.

Wilson’s pictures are larger; the biggest room in the extension was purpose-built for them, where they hang like the masterpieces in the big gallery at the Wallace Collection. One of the most interesting pictures here is a big Kitaj of Wilson and his wife (also an architect) called ‘The Architects’. Does one like this intermarriage of the building, the collector and the collection? Does anyone find it claustrophobic, as my wife did Chichester when we brought students here ten years ago? Then I liked the place well enough, but didn’t appreciate it the way I do now, as something that keeps modestly cross-referencing itself to make a perfect little realm of art.

At this point I realised that to catch the last daylight for a walk in the town I needed to escape from the gallery into the streets and onto the walls, scaled down remnants in this human-scaled place. Even so, I was too late for the Octagon Chapel, an architectural curiosity, and for the grounds of the Priory with their own captive section of the town walls. Dusk was a show for my benefit and gave me just time to get back to the Gallery for the last part of Bomberg with its disturbing explosions of colour and form, and for the mildly disturbing apparition of a well-known critic many years my junior, who appeared twice looking pretty senior, and nervous before his lecture. I was the truant whose only responsibility lay with the paintings, so I got on with looking.