Every year in the early spring they mount a display of orchids in a greenhouse at Kew. This year it was Colombia’s turn, and around 6000 blooms of 150 South American species were crowded together in three different artificial climates under a single cascading structure resembling a landscape-form in steel and glass. The exhibition drew large numbers in search of beauty, oddity and natural diversity, who had to wait their turn at busy times of day, like bees clustering round a popular shrub.

What or who are orchids for?

In one sense they’re the commonest plant and at the same time among the rarest. They’ve spread everywhere and diversified into the largest number of distinct species (around 26,000) of any botanical tribe.

Yet they’re impossibly anomalous among plants, with some of the strangest life cycles of all, including parasitism and deceit, bizarre structures of great complexity seemingly designed simply to plant lumps of pollen on the head or tail of males of a chosen insect species. Many orchid species are not rooted in earth, but attach themselves to jungle trees and dangle their roots in air, ‘roots’ which do root-jobs of absorbing nutrients but violate the main meanings of the word, a kind of botanical outrage. 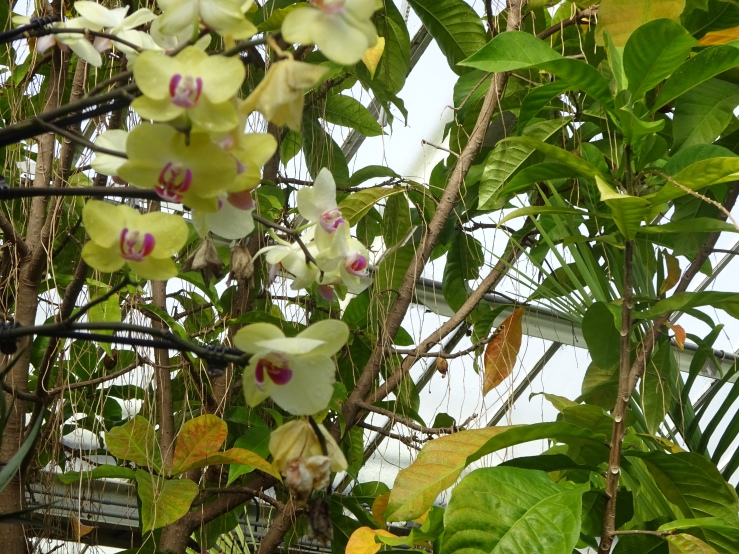 Worst or most wonderful of all is what orchids do to their pollinators. Here exaggeration and deceit go together. Nectar or food or sexual gratification which doesn’t actually exist seems to require more grandiose sacs or pouches or replicas of the female insect in order to seduce the victim or dupe (what should we call him?). Even now moral disapproval creeps into descriptions of orchid ‘contrivances’, promising rewards but giving none. Charles Darwin, one of the most acute of early students of orchid pollination, couldn’t believe that orchids really had no nectar for their visitors, or that this was a system that would work.

A suspicion lingers that orchids have fooled their human enthusiasts as well, luring them with complex forms that violate established norms of size and proportion and instil suggestions of resemblance to all sorts of non-botanical forms, so that, like the wasps, the orchid’s human fans are mistaking the blooms unconsciously for something else.

Popular names of orchids go on expressing the ancient folk-view that there are deep sympathies between the lives of human beings and those of plants. Modern names like ‘fried-egg orchid’ often stick out by their starkly comic intention; in Shakespeare even the most grotesque flower names, like ‘dead man’s beard’, feel like something more than a joke.

‘Slipper’ orchids are not diminished by the name, which conjures up spaces of myth, into which victims fall in search of food and will only get out by doing the plant’s bidding, collaborating in the orchid’s plans for its own continuance. It feels absurd to talk as if we believed in the orchid’s agency, but it becomes more and more feasible to assume the intelligence of plants (see Colin Fudge on trees), insects (especially ants, bees and termites, including many pollinators) or birds (astonishing recent research on birds’ brains). And the stories people have told about plants couldn’t be more preposterous than the dramas acted out in the innermost chambers of certain orchid blooms. 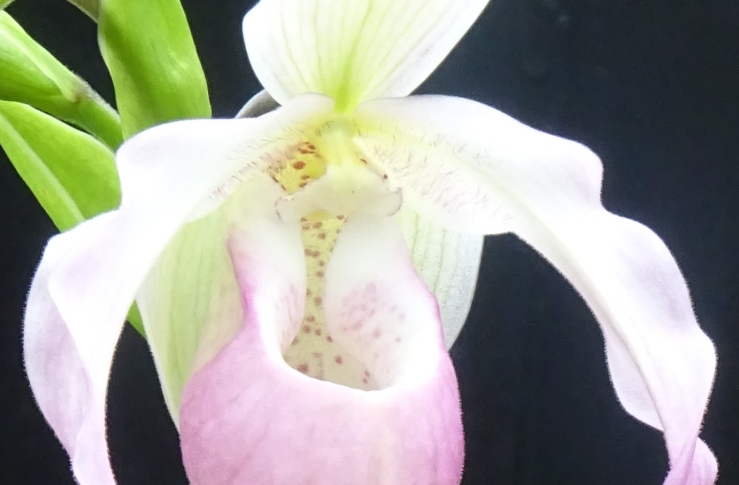 But to see, or even to imagine, these Piranesian spaces you probably need to blow up a photograph of an orchid interior to approximate the bee’s-eye view and then you tell yourself that you are approaching the true essential meaning of the orchid. At Kew I picked up The Book of Orchids, a life-size guide to 600 species from around the world illustrated with one photo of each, or sometimes with two copies of the same photo, one large and one small. I assumed that the small one was life-size and the big was a blow-up which let you see richness and complexity invisible to normal human sight. This is often but not always what the relation between the two photos is. Sometimes the little one shows the whole bloom for the first time, because this orchid is too big to fit onto the page-size chosen for this book.

Six hundred orchids has a magical sound, but the speed of the survey inevitably produces vertigo, and taking in so many almost requires isolating the blooms from their surroundings, and even from the stems and the leaves of their own plants. So you have cut-outs of the most compelling feature, a single flower, the orchid as logo, more or less. Some orchids, like the slippers, do occur singly in the wild or at least widely spaced on the stem, but these are likely to be the heavier blooms, which would drag the plant down in clusters.

To understand orchid structure you probably need to isolate single blooms in this way, maybe even render them artfully through drawings. To see many actual examples on a single occasion you need to create something like a museum-situation, which if you’re lucky, as for example at Kew, will also feel like a habitat, a constructed jungle. Some orchids will sit in pots on the ground, but others will appear to have attached themselves to trees and spread their roots in air, far out of reach.

There’s a limit though, and some of the most precious, like most of the slippers, will appear behind glass to protect them from the attentions of the orchid-lovers. And if proof were needed, moving from cool and dry to hot and wet climates simply by opening and closing a door reminds you that you are crossing distances that would consume whole days outside the botanical museum.

So you continue your trip through this spectacle of the world’s diversity which is more like a visit to the National Gallery than an hour in an actual jungle. And the deepest involvement requires further manipulation of the images collected on the ‘journey’, carried out afterward at home, where you are continually noticing features that there was no way you could see on the spot, because you couldn’t isolate each bloom like a painting or take the time to walk round it like a sculpture. In certain respects the fullest plant museum exists only on a screen, best of all that of a small laptop, not a large television which cannot focus the subject or your attention nearly so tellingly.

Surface patterns are among the most startling and mesmerising features of these blooms, endlessly attractive in a literal sense—the eye is helplessly drawn to them. Under magnification they become something different and then we can imagine the disorienting effect on the insect trying to keep its balance in the maelstrom of a centrifugal pattern which disperses itself more violently as you move in nearer. Petals and sepals that all look much the same to the human eye are strongly differentiated when magnified and depict radically different kinds of fragmentation, one alarming, the other reassuring. Seen close up, the overall effect is much more directional and thus coercive. 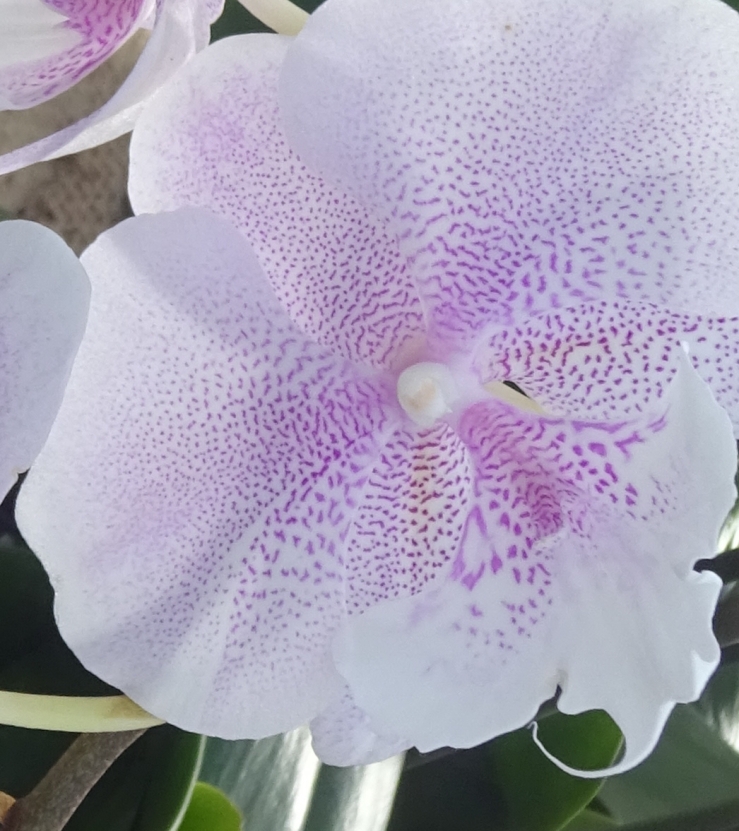 In this species blooms often present themselves ‘upside down’ or cockeyed, meaning that to experience their symmetry or to recognise the typical orchid structure of three petals overlaid (in reverse) on three sepals, making a six-pointed figure, you need to reorient yourself bodily, and this leads us to imagine insects making aesthetic choices as they land on orchids.

Other, blotchier patterns look to human eyes like stippling, a technique not a purely random occurrence, blobs trying to come together rather than simply spreading themselves, a focusing effect to which it would be hard to pay no attention at all. Is such visual complexity of no consequence to the insect, and the watercolour-like variations in intensity as you move from the centre to the edge of each blob? Human beings see faces everywhere, especially in whole classes of plant blooms. Is it fanciful to imagine insects having similar susceptibilities to certain combinations of dots, lines and concentrated forms? Not that we could easily guess what they remind the insect of, just that this sort of unconscious memory might be taking place.

Darwin was fascinated by insects’ responses to colour, a subject which goes on provoking research and remains almost as much of a mystery as ever, as is also the human response to colour in plants, though studied more thoroughly and for much longer. 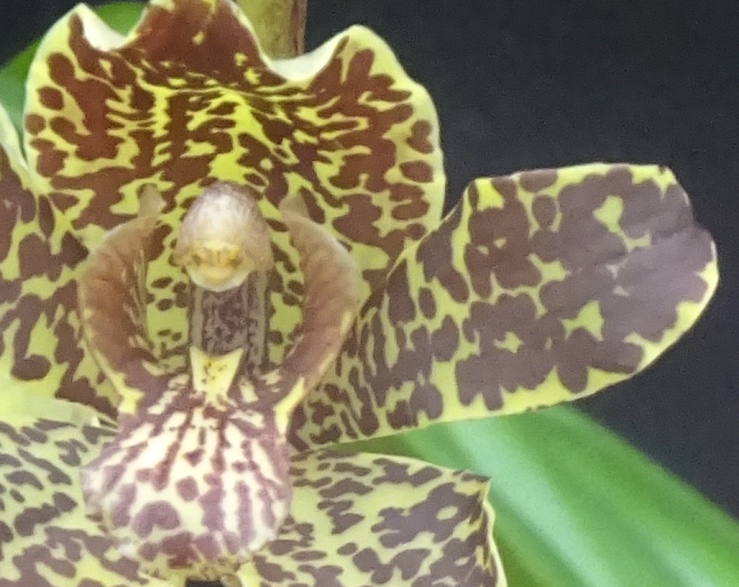 Human beings are also prone to see writing where there is none, in vegetable scribbling on leaves or tree bark. Some of the strangest surface pattern on orchids has evidently suggested lines of letters in a genus labeled ‘grammatophyllum’, which seems made to be puzzled over, trying to read something into the sequence of marks. Ruskin was always imagining that the world put a certain natural feature in front of him to say something meant specifically for him, perhaps a late, narcissistic rendition of the old belief that the Creator meant for us to find lessons in stones and instruction in storms. Watered down enough, something like this must be taking place in many people’s conversations with orchids, in spite of idealists like Kant who used flowers to preach purposiveness without a purpose.

There is such diversity in orchids that we couldn’t possibly do justice to it here or anywhere else. There are the forms that for some personal reason disgust us, because they remind us of varicose veins or toothless mouths. There are orchids which don’t look like flowers at all, like the wonderful freaks called spider orchids, not because they actually look like spiders, but because they have long, ungainly features, and more than a few of them. Visually similar are around six species, two of whose sepals go on extending themselves from the main bloom until they hit a hard surface, thus producing streamers several feet long. I have captured only a junior version of this.

There are furly copper-coloured species that perform the unnerving feat of turning themselves inside out, none of whose elements you can convince to stop shuddering, an insect-sized version of Baroque movement. And there is another orchid so magically translucent it is hard to believe it is alive and not something created just to show off certain properties of light, a task of too-refined focus to be entrusted to a creature. This species also exhibits one of the most high-handed divergences of sepals and petals, which now form two independent whorls, petals fused into one and sepals floating free, with nothing in common between them except that they are joined at the hip.