The Petrie is a museum with no presentation in the modern sense, no attempt at atmospheres or effects. Objects are packed as tightly as possible, bumping into each other, often slightly obscured by labels which never try to make a case for their items’ importance, or even to situate them, except for vague references like ‘Dynasty XVIII’.

The only criterion is visibility. Objects are arranged by size, so you come to the biggest first, or by type or subject in patches, so small models of animals are together, but only some of them, and combs made of bone. This arrangement (or lack of one) is now a historical curiosity. Formerly many museums were like this—the museum in Whitby in Yorkshire comes nearest of those I can remember.

My method for dealing with the overwhelming profusion of mostly small things was to pick out what was strangest–drastic truncations (‘senseless fragments’), faint reliefs so shallow it was hard to see them at all, half-erased scenes, damaged inscriptions reverting to rough lumps of pure geology, drawings which might become reliefs or were cheaper substitutes.

I wasn’t looking for important objects or even for the best ones, liking the feeling that these weren’t great to start with and that I had been turned more than usually loose among them, without guidelines or commentary. The extreme fragmentation of the remains made them more like disconnected flashes or hallucinations. Why did I like some of the most damaged best? Because this was where you felt the effect of all that past time most powerfully, time that wasn’t helping you but trying to defeat you.

Museums are usually more accommodating, making you think you are getting somewhere, but here there’s no overarching narrative, only a tremendous crowd of separate things. I got the idea I should write about the Petrie in the first flush of my enthusiasm, preserving the exact state of my current ignorance, before I’d read any further in the two books I got there and found out more. This would give me a chance to test a favourite theory, according to which I’ll do damage by burdening myself with learning, like a burrowing animal going further into darkness.

I could still pick out my favourites–the fat porphyry frog, the sacred lettuces, the dog under his master’s chair, the scene of trading sandals for grain, the ruined ivory like flesh, various reused stones defaced from their former shapes, the misshapen leather bag still carrying its quota of congealed fat, and half a dozen partial depictions of Akhenaten and his family, instantly recognisable.

The final stage of the experiment (if it worked) would be a separate piece, approaching this little museum newly stuffed up with knowledge and guided by the disheartening floor plan passed out free to visitors (mainly students the day I was there, instructing the girl- or boy-friend they had brought along, or sketching objects in the cabinets, who didn’t need such diagrams), a plan which showed every single display case, but generically and not especially accurately. Wasn’t actually writing the second piece, in order to complete the before-and-after scheme, innocence and experience, doomed in advance, before it even happened? 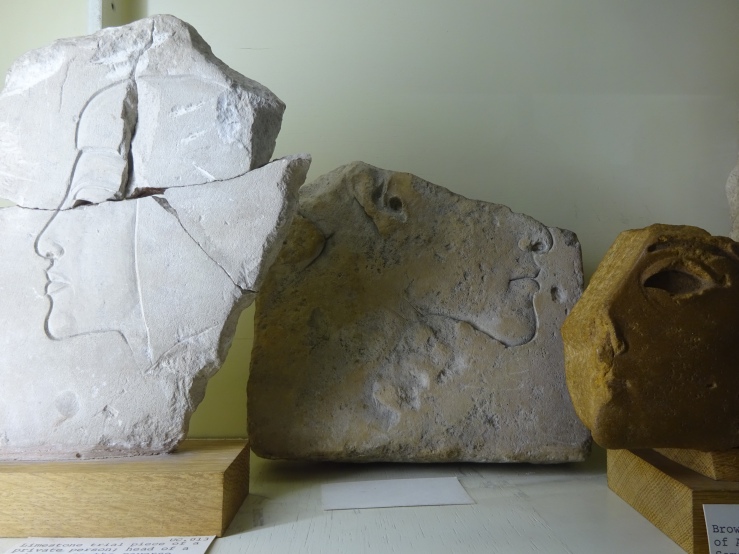 Malet Place is a small turning off Malet Street lined with UCL buildings.  The museum is upstairs in a building on the left near the far end of this mainly pedestrian street.

2 thoughts on “Mysteries of London 2: Petrie museum of Egyptian archaeology”