How to explain never noticing Antoni Tàpies until now? Is it because of insoluble problems with the reproducibility of the work, whose material presence is essential and doesn’t come through in photographs? Tàpies goes on calling his works paintings long after this word ceases to fit. Instead of pictures of suffering, Tàpies presents the martyred body itself, a canvas defaced by gouging, tearing and brutal insertions, obscured by coverings that largely obliterate it or disguise its existence. He calls the surface he works on a battleground, and all the marks or adjustments he makes, wounds, but his paradoxical goal is tranquility. He quotes Heraclitus, ‘all arises from discord,’ and ‘harmony comes from its contrary.’

Besides the Pre-Socratics one of his main inspirations appears to be Zen Buddhism with its appetite for sweeping away complexity of content in order to contemplate the void, in the shape of a blank wall or an expanse of raked sand.

It isn’t immediately evident from the work that Tàpies is a learned artist, whose grandfather owned a well-known bookshop in Barcelona, destroyed by bombing in the Civil War, and whose father had a large library. Wandering in the war-ravaged city Tàpies had the sense of a heritage taken away, a feeling exacerbated by two years recovering from tuberculosis (from age 17 to 19), confined first in his bedroom at home and then in a sanatorium.

Later he attributes key features of his work to all that time passed within the same narrow walls, in a space furnished only with a bed and a wardrobe with large mirrors on its doors; features—wall, door, mirror—which dominate much of his work. He calls this period his forty days in the wilderness, a painful experience of deprivation ‘that may not have ended even now’. When you first meet the phrase, it is a shock to find him pointing to a Scriptural model in trying to describe his own progress as an artist. Is there really a religious painter hidden in the work of Antoni Tàpies and trying to get out? 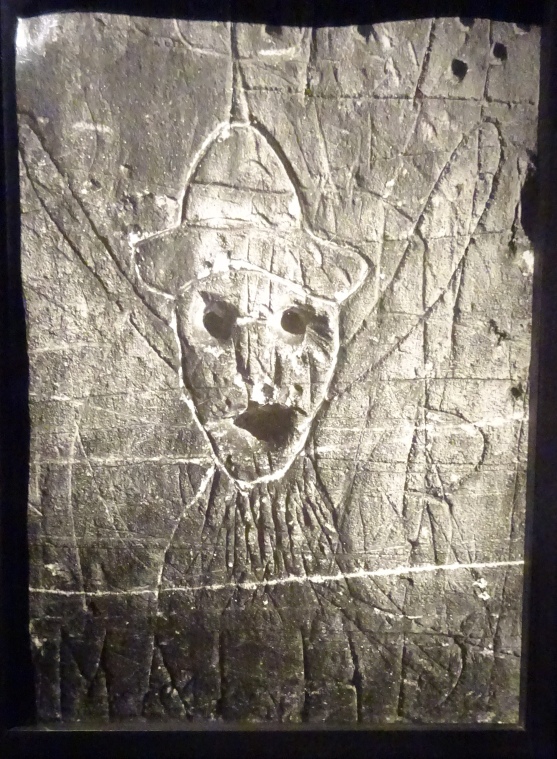 I first encountered this work in a little display called Writings on the Wall at Waddington Custot in Cork Street, which included six artists, half of them completely or nearly unknown to me (Tàpies one of these), only Brassai. Dubuffet and Twombly previously familiar. Brassai was represented by photographs of defaced walls in Parisian streets, defaced by punctures that someone chanced upon later and turned into the eyes of faces made with a few gouged lines, which were under- and over-written by other rough attempts at writing or drawing.

Brassai called these eyes ‘the eyes of the street’ and felt a demonic force in the rudimentary scratchings.  Dubuffet had photographed graffiti in similar places and drew graffiti-like pictures of his own, which became austere and illegible lithographs and etchings in black and white.

Tàpies was present here in the largest work by far, called DUAT, consisting of a long horizontal expanse of sand like a beach, a surface of sufficient depth to write and draw in it with no finer instrument than a stick.  The main word duat (if it is a complete word) which I still don’t know the meaning or even the language of, is written in two different mediums—as dug out of sand, and as scrawled with an oversized pencil (the right half of A, and the whole of T). I can’t tell you how pleasing it was that someone had given up gouging and reverted to writing this word halfway through. It’s not the only sign of randomness in the work, just the most unapologetic.

I didn’t notice one of the main consistencies in Duat in the course of lots of looking (on more than one occasion). I’ve noticed only now that there are three ‘doors’ drawn in sand, evenly spaced across the top two-thirds of the canvas. All three are drawn in sand; only one is ‘open,’ having had the sand excavated from the rectangle and the missing door drawn in perspective (‘hanging open’) to the left of the empty opening.

A frame is drawn in the sand around the middle door. There’s a mysterious build-up of sand like braided hair down one edge of the third door, evidence of raking or clearing the sand with some kind of scraper. These are not the most interesting details in the whole work, but sand is the most arresting of the various materials, and the one with the most life in it. The effect of the sand standing up on the wall, and not falling off, is like a magic trick that goes on delighting the spectator for a long time, like the drips and spirals of paint in a Pollock that you know came down onto the canvas from a height, but are now standing up and cancelling gravity.

Maybe the doors are windows, and the indoor shutters lying or falling at the bottom of the picture belong to them and have been exploded off, like a rock blocking a tomb, and the white (beach) towel is what’s left of the grave-clothes.

One of the first things someone coming to Tàpies notices is all the crosses. There are two of them here, in insignificant locations, one camouflaged as an X, and further obscured by forming only a part of the Roman numeral for eleven. Surely they aren’t that important in what this picture (without thinking I use this unsuitable word) means.

At this point maybe we should read what Tàpies has to say about the meaning of the cross in general and in his thinking—an emblem of suffering, a graph of the meeting and crossing of contrary forces, the world tree anchored in the centre of the earth, the linking of routes from the four quarters of the compass, the universal person formed of symmetrical binaries, and more. Turned a quarter-turn, the cross becomes an X, a sign used to delete something or multiply it. 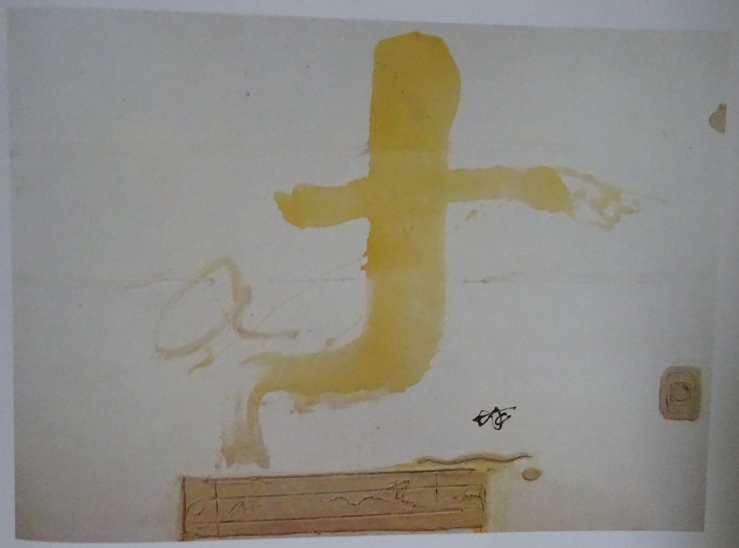 Even the letter T which appears often as an attenuated, parochial form of cross and one of the initials with which Tàpies signs his work can be etherialised in varnish like a spectre rising from a chest of drawers.

Tàpies feels a powerful urge to reduce symbols to the simplest graphs, but then to reload them with all the cultural baggage he seemed keen to escape or at least to strip of its parochial character. 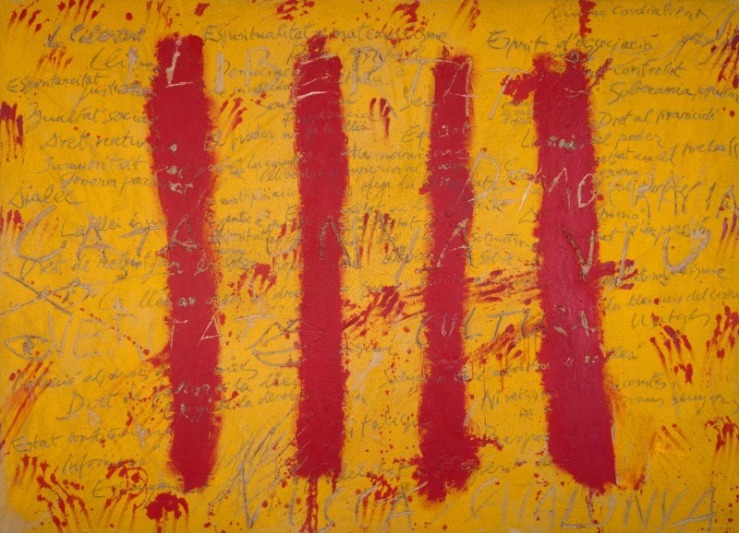 He was a passionate Catalan and reworked the Catalan flag (in Catalan Spirit, 1971), four red stripes on a gold ground, which at first seemed to me trivial and local, until I focused on how the red had become separate from the yellow and each stripe separate—different, individualised—from the others and written over and under with legible and illegible inscriptions that changed colour as the letters crossed the stripes. Tiny and indistinct replicas of the stripes skitter across the surface like the footprints of small animals or the sharp scratches of their fingers.

And the flag has been turned sideways from horizontal to vertical, or is it an earlier, archaic form taken from a coat of arms, itself a reminiscence of a moment after a battle when Louis the Pious dips four fingers in a Catalan count’s wound and writes them onto the dying man’s gold shield? So Tàpies’ rudimentary form materialises as a Wagnerian myth, and we’re back at art as magic, and now one of Tàpies’ favourite lines of Whitman flits through our heads ‘the priest leaves and the poet appears’.

There are gruesomely literal Tàpies like Form of a Crucified Figure of 1959 or Material in the shape of an Armpit of 1968, and there are others just as poignant and in their own way as grisly, like Holes and Nails in White, also 1968, a dissected crucifixion which keeps the wounds and the nails apart, not the only time that Tàpies forces parts of the construction through from the back, a painful piercing of the flesh the whole way through. Here there’s another deformation of the surface, boiling up to become liquid after being solid, then congealing again and seeming bodily or visceral because of the imagery of pain.

This is one of the most recessive instances of a recurrent Tàpies motif, elements of the composition fleeing the centre and ending up at the edge, even over the edge and out of our sight. 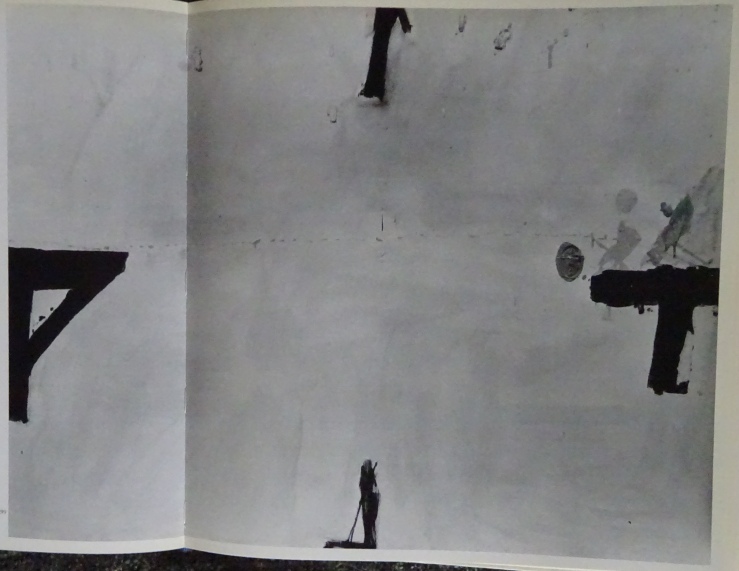 Again the childishness of a magic trick which can make things disappear and persuade you they are gone for good, but these works are also fables of the transitory, in which the image is swept aside like marks in the sand by the tide, which doesn’t always bother to erase them completely.

The most profound link in Writing on the Walls occurs between the walls of Brassai, pictures of hallucinatory vividness, of found objects located in particular Parisian streets at specific times of day, and Tàpies’ walls, which are not pictures of walls but objects which will hang on walls like paintings, yet are not paintings though he calls them that, but walls themselves, something more primary and immediate than canvas, a different order of reality, which incorporate earth in their substance and embody the Heraclitan magic of getting a spark of fire to erupt from a pile of rubbish composed of the humblest materials—sand, straw, string, rags, burnt and ruined things.

‘Writings on the Wall’ at Waddington Custot, 11 Cork Street, London W1 until 8 August

1 thought on “Antoni Tàpies: writings on the wall”